The Commonwealth of Redmont
Prosecution

COMPLAINT
The Prosecution alleges criminal actions committed by the Defendant as follows: LHBank is run and operated by both Milqy & Secretary Deadwax. On July 13th, Milqy proposed a contract to Former DEC Secretary Wetc that would sell DEC minting requests to LHBank for $0.01 on the dollar. The dollar amount of those debts were $770,635, bought by LHBank for $7,706.35. This is an absurdly lower price than what would be considered justifiable. This proposal was made after the former secretary was asking around in a VC what final acts he could do to abuse his position as DEC Secretary because he didn't care about the punishment. During the VC they drafted the contract. After the contract was signed in the same VC Milqy and Wetc also mentioned that they were going to quickly delete any incriminating messages. LHBank later sold/attempted to sell, these DEC minting requests to multiple banks. These offers were around $0.50/dollar, however were at different amounts for each offer. Selling the minting request at this price would net LHBank with a profit of $377,611.15.

The cause for money laundering is the following:

Money laundering is defined as:

“Any act to conceal funds illegally obtained, through commercial transactions, business deals, or any means otherwise."

The only reason Wetc accepted this contract from LHBank is that Milqy, Deadwax and Former DEC Secretary Wetc were "best friends". Along with a friendship, the three also shared a political partnership, with both Wetc, Deadwax and Wetc being among the highest ranking members of the MHP. Wetc being chairman and later on leaving the chairmanship to Milqy. Deadwax, and Milqy assisted Wetc in signing a contract that would benefit their own business ventures, which is cause for the charge of Accomplice to Corruption. After the fact, Milqy and Deadwax have intentionally tried to block any inquiries into the original contract, as well as the subsequent selling of those DEC-Minting requests to other banks. They went as far as creating a group chat called "If we go down we go down together". This is cause for the charge of Obstruction of Justice against the Defendant. Making people enter into a contract to not talk to the Department of Legal Affairs. Which is the definition of Obstruction of Justice.

PROSECUTING AUTHORITY REPORT
I. PARTIES
1. The Commonwealth of Remont
2. Milqy

II. FACTS
1. Milqy & Deadwax created a group called "If we go down, then we go down together"
2. Milqy & Deadwax forced people to sign an NDA to not talk to the Department of Legal Affairs so we couldn't conduct an investigation.
3. Deadwax & Milqy have a very strong political and economic tie and would both profit tremendously from this operation as both are owners of LHBank.

III. CHARGES
The Prosecution hereby alleges the following charges against the Defendant:
1. 1 count of Accomplice to commit Corruption.
2. 1 count of Obstruction of Justice.
3. 1 count of Money Laundering.

Evidence:
As the list of evidence is so large, I will attach the Report from the Office of the Attorney General. 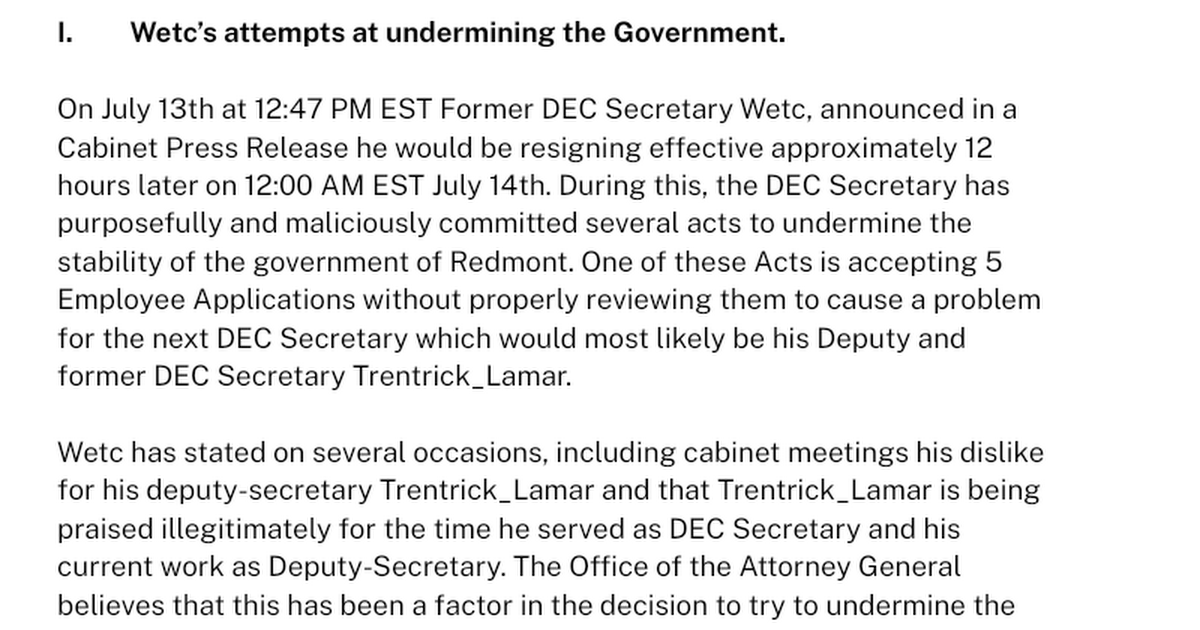 Minting Request Contracts Investigation Report. Official Special Report (July 28th 2022). Office of the Attorney General Note: This is the current state of our investigations, we currently believe that the evidence and the story are correct however if new evidence is found we will adjust our fi... 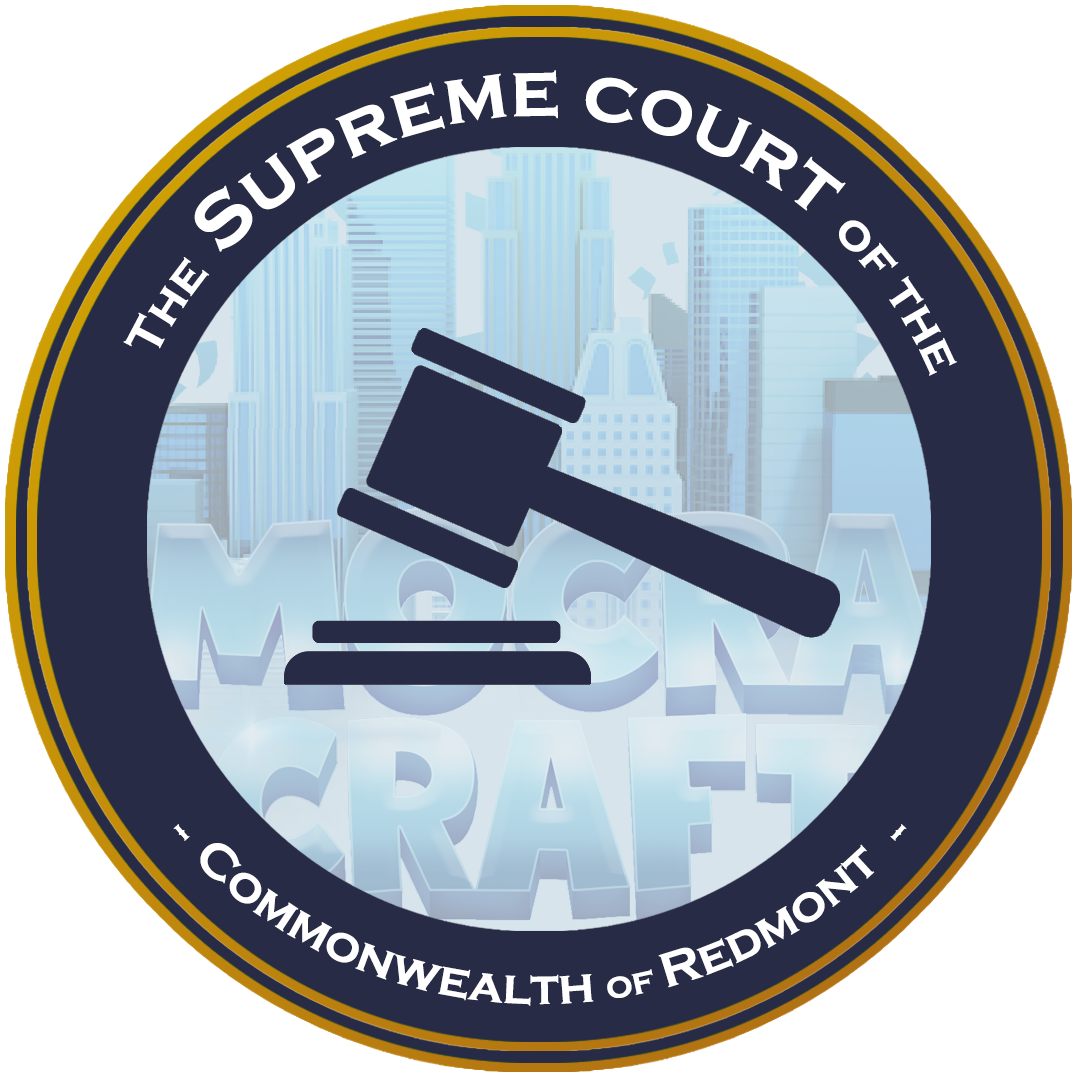 @Milqy is required to appear before the Supreme Court in the case of Commonwealth of Redmont v. Milqy [2022] SCR 13.

MilkCrack
attorneygeneral
Your honour the Commonwealth would like to request, that Justice JoeGamer recuse himself and not discuss this case with any judges or justice pressing over this case. Justice JoeGamer is an accountant for Lucky-Hilton Bank we do not know the extent of his involvement in this particular deal however it is clear that JoeGamer has a certain relationship with the company and its owners and the outcome of this case could affect his employment status there.

xlayzur
pressassistantexecutive
Your Honor, this prosecution is similar to the case Commonwealth v. Deadwax [2022] SCR 12 which the Supreme Court declared the Department of Legal Affairs report will be dismissed as improper evidence and won't be used in that case. Will the Supreme Court take that into effect with this case?

Chief Justice
Justice
The Supreme Court will follow the decision in the case Commonwealth v. Deadwax [2022] SCR 12 and hereby declares the report will be dismissed.

Chief Justice
Justice
That is up to the Justice itself and after a conversation he will not be recussing himself of this case.

I request the prosecution to present his opening statement within 48 hours.

13 - Recusal
(1) Judicial disqualification, also referred to as recusal, is the act of abstaining from participation in a case due to a conflict of interest.
(2) A motion to recuse can be filed at any point in a case prior to the verdict. A Judge must consider whether or not to voluntarily recuse themselves.
(3) Where a judge does not voluntarily recuse, a second Judge will respond to the motion and either accept or deny it. In the instance the judge accepts the motion, that judge will then preside over the case.
(4) Conflict of interest may involve:
a. Bias/appearance of bias.
b. Interest.
c. Ex Parte Communications.
d. Breach of Judicial Conduct.
e. Prior Work as a Lawyer for either party.

So to be clear the Chief Justice is denying my motion to recuse?

Chief Justice
Justice
Justice JoeGamer had no business in Hilton Bank, he does not work for them anymore but still holds the title of Accountant anyways. He was also not involved in the possible things between the Hilton Bank and wetc. Even if he still worked as Accountant, it was a minor job of copying numbers. Therefore there is no conflict of interest, but I will note it down. The Supreme Court upheld professionalism over judging on cases and I will not be dangering that.

The motion is denied. Further questions on the matter can be asked through the forum or in discord.

hugebob23456
barrister
Given the resignation of Attorney General MilkCrack, the Commonwealth of Redmont would like to kindly request that this case be put on hold until a new Attorney General can be chosen. Thank you.

xlayzur
pressassistantexecutive
Your honor, putting a hold on this case would be violating my clients constitutional right:
"IX. Any citizen, criminal or otherwise will have the right to a speedy and fair trial presided over by an impartial Judge."

The Deputy Attorney General, Hugebob, only requests this due to his relevance in said case which makes him unable to represent the Commonwealth.

Chief Justice
Justice
The Department of Legal Affairs started the case with a prosecutor leading it and the Supreme Court believes that the Department has enough resources to continue the trial. I request an opening statement within 48 hours from now. If this is not the case we will continue without it.

Yeet__Girl
eventcoordinator
Damn the DLA is shit at their job

Chief Justice
Justice
Lawanosepr is found in contempt, the DoJ can fine him $250 when it is his first offence and if not follow the allocated punishment following the judicial standards act.

Kanne
attorneygeneral
Since State Prosecutor Admin23 will no longer be able to deal with this case and since I just got into the office and I won't be able to get online for another 4 days due to IRL issues, I ask that this case be put on hold for a week. I am fully aware that this is a long time, but I kindly ask that this request be accepted given the backlog of problems the office is experiencing.

Chief Justice
Justice
I believe that the DLA is more than capable of handling such situations. I'll give an extension of 48 hours so you can focus on SCR 12 and then on this one. Please try to follow these time limits.

xlayzur
pressassistantexecutive
Your honor, the Prosecution, and Defence have come to an agreement on a plea deal:

PLEA
1. Defendant, Milqy, pleads guilty to one count of Obstruction of Justice.

Milqy
presidentofthesenate
i do understand this, and agree with my lawyer.

Chief Justice
Justice
Then I ask you under oath are you guilty of this crime? If yes the Supreme Court will discuss and await its ruling on the plea deal and the verdict in general.

Milqy
presidentofthesenate
Yes, your honor. I am guilty of one count of obstruction of justice.