Cooleagles
IN THE COURT OF THE COMMONWEALTH OF REDMONT
CIVIL ACTION

COMPLAINT
The Plaintiff complains against the Defendant as follows: The Defendant approached Hamilton City Bank in search of financial support around mid-July. The defendant soon was granted said support with a $22,740 loan (not including interests). About a month later, Icarus Bank and Hamilton City Bank merged, which then merged all outstanding debts between both companies. A few days following the merge, the Defendant mentioned to Hamilton City of their previous debt with Icarus Bank, a $59,000 loan (not including interests). Whilst, the Defendant did pay off their full $22,740 loan with the interests, the 59k loan still remains unpaid.

II. FACTS
1. July 18th, The defendant was given a loan of $22,740 loan, ($26,151 with interests) from Hamilton City Bank
2. Beginning in August, Hamilton City Bank and Icarus Bank merged; therefore, merging all outstanding debts and contracts
3. August 15, the Defendant mentioned their outstanding $59,000 loan. Icarus Bank had a 3% weekly interests policy with their loans, which now leaves the total at $76,700 (a total of 10 weeks). In bringing up the debt, the Defendant even offered to merge both debts even though they accumulated to a large amount.
4. The full $26,151 was paid for the first loan, but the $76,700 loan has not been paid. All that has been offered to my clients were excuses and numerous extensions now bringing us into the month of November.

Evidence 2 - Proof of Acknowledging both loans + agreeing to merge them.

Evidence 3 - Proof of Interests to 59k loan + lack of responsiveness to reminders. 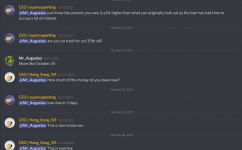 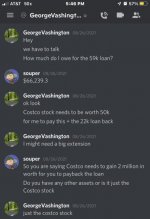 The Defendant,
@Mr_Augustus , is required to appear before the court in the case of Hamilton City Bank v. Mr_Augustus.
Failure to appear within 48 hours of this summons will result in a default judgment in favor of the plaintiff.

I'd also like to remind both parties to be aware of the Court Rules and Procedures.​

Justice
I will give the Defendant an extra 48 hours because my announcement in discord did not go through while I sent it. It might have been the discord app or my wifi. The defendant is now summoned.

If I may, I would like to make it known that it has been more than the given 48 hours and the defendant has failed to respond to their summons.
Thank you.

Considering the Defendant hasn't arrived before the court I shall proceed with a default judgment. I hereby order the following: a total fee of $76,950 transferred from the Defendant to the Plaintiff, HCB.

I thank the Plaintiff for his time. The case is hereby adjourned.